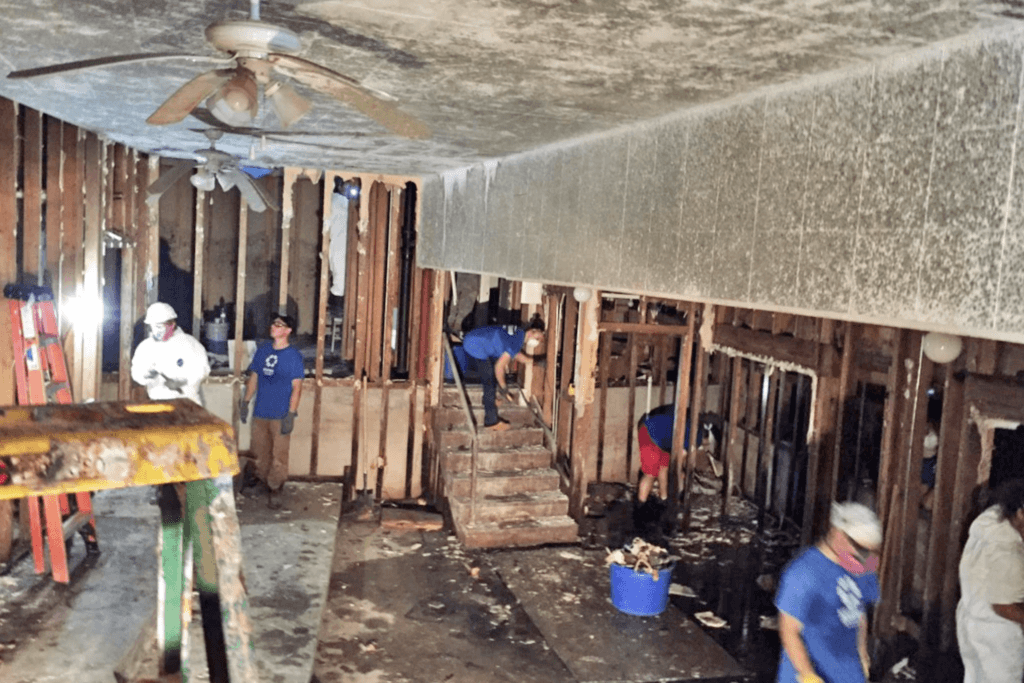 NECHAMA volunteers and AmeriCorps NCCC members work to gut a home that has been completely overtaken with mold.

In mid-August 2016, as flood waters receded in Baton Rouge, the first NECHAMA trucks began arriving in town. Baton Rouge, along with a wide swath of the state, experienced several days of unrelenting rainfall that in some regions, totaled over 30 inches. What followed was extreme flash flooding that inundated homes and displaced tens of thousands of people. Some emergency shelters were full for weeks after the initial evacuation.

During the next 2 and a half months immediately following the flood, more than 600 NECHAMA volunteers lent a hand and assisted 114 households in the greater Baton Rouge area. The local Jewish community networked us in so we could quickly go to work directly helping both Jewish and non Jewish families.  Community members also stepped up and started a meal train to keep our team nourished. Over 42 people cooked one meal or more so that we could focus in the field work day-to-day. B’nai B’rith International, Beth Shalom of Baton Rouge, Central Synagogue of Manhattan, along with 254 additional donors supported the effort financially. More than 14,000 direct volunteer hours and $31,831.00 in contributions were channeled into Baton Rouge’s recovery by the project’s conclusion.

Airlink, a long-time supporter of NECHAMA, provided our staff and volunteers with nearly a dozen flights both in and out of Baton Rouge. Not only did this save us valuable dollars in travel funds, it allowed us to rapidly scale-up our teams and get families the assistance they needed quickly. While in Baton Rouge, the University Presbyterian Church welcomed us in and served as our home away from home. A dozen residential volunteers anchored the day-to-day projects and some spent more than 6 weeks embedded and living in the church and working in the community each day. Also contributing to the efforts were day volunteers, AmeriCorps NCCC members, and shorter term residential volunteers who all worked tirelessly gutting one home after another.

Recently, long-term volunteer Zach, recounted how he got to know one homeowner that had been living in his childhood home prior to the flood. As Zach and his teammates literally peeled back the walls that were damaged by the flood, they surfaced wallpaper that had been covered over decades ago. It was part of the homeowner’s childhood and a surge of emotions filled the room when Zach toured the homeowner around the house for a progress report. The realization that a lifetime of memories were made in this home that was now destroyed was very hard on the homeowner but left an indelible mark on Zach and motivated him to keep working and helping so that future memories could fill the void.