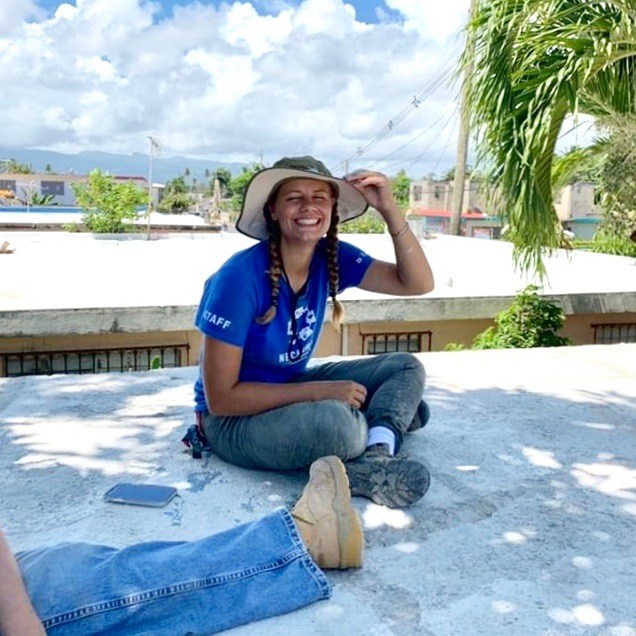 After Hannah graduated from West Virginia University with a Biochemistry degree, she was offered two jobs: A research position at Johns Hopkins University studying allergy and clinical immunology and a Corps Member position with AmeriCorps NCCC. If she would have accepted the research position, she would most likely be getting her masters degree. But, she decided to take the AmeriCorps route and spend a year volunteering, which eventually brought her here to Puerto Rico to work with NECHAMA.

Hannah’s love for volunteerism started when she took a service trip to Peru in college. She and her classmates were working in an impoverished town where people did not have access to medical treatment. She provided medical aid for this community and loved helping people who “don’t have a lot, but they’re okay with that, and they’ll take 10 seconds out of their day to smile at you.” When trying to decide between jobs, this was the trip that pushed Hannah into accepting the Corps Member position instead of advancing her research career right away. She wanted to continue making a meaningful impact in the lives of others.

While in AmeriCorps, Hannah found a new way to challenge herself by applying to a team that focused solely on disaster relief and wildland firefighting. She mucked and gutted her own home after a terrible flood hit Maryland the previous year, so she wanted to help others who had also been affected by natural disasters, especially one woman in particular.

With a few days left on a disaster assignment, Hannah had been instructed to do an assessment on a house. The homeowner was Peruvian. Hurricane Florence left her home in unlivable conditions. Contractors took her money and ran. She had nowhere else to go, and it struck a chord with Hannah. She gathered a few people from her team and they mucked and gutted her house as best as they could in those last two days. Because there was more work to be done after they left, Hannah left a friend of the homeowner’s with specific instructions on how to continue the job. After that moment, Hannah knew that she wanted to continue making an impact and remind those who feel left behind after a natural disaster “that someone still cares.” She has been a highlight for volunteers and a bright spot in homeowner’s days, and we are so thankful Hannah decided to join our team!