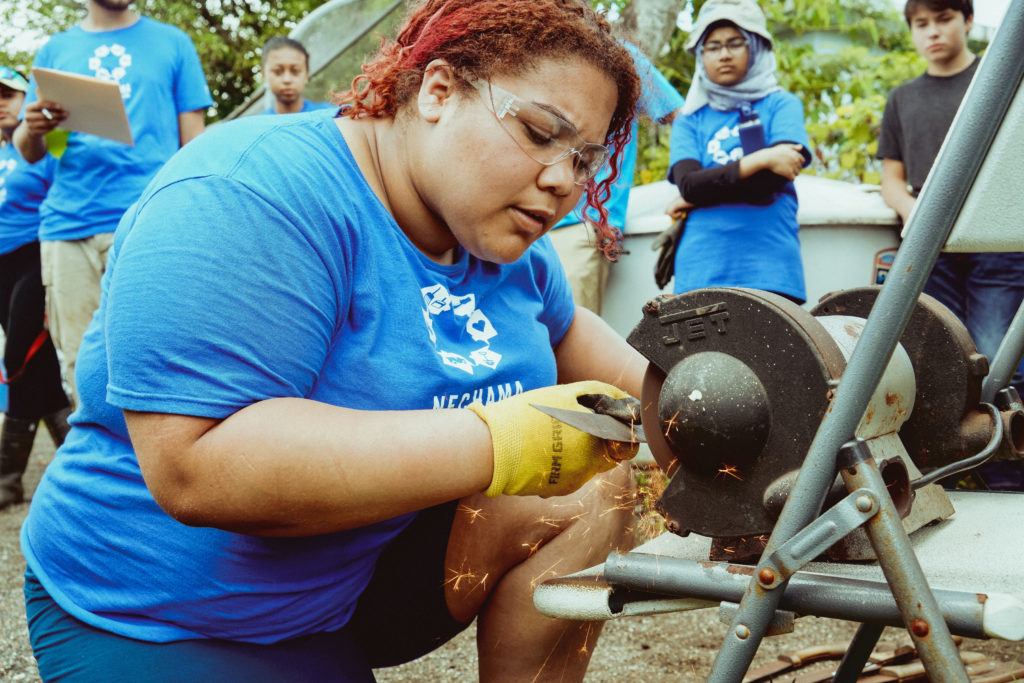 Each cohort is split into teams, and each team rotates between work sites to get a holistic view of the environmental, infrastructural, and economic setbacks caused by Hurricane Maria. Our goal is not only to educate, but to involve every student in multiple sectors of Puerto Rico’s recovery. When disaster strikes, NECHAMA is interested not only in immediate fixes, but in resilient solutions that will strengthen communities and better prepare them for the future. We believe this mindset is especially valuable in Puerto Rico where powerful hurricanes are common.

As we focus on a more holistic approach to the island’s recovery, we are taking time to engage with and support local organizations doing important work that focuses on the communities we are assisting. While NECHAMA still does concrete roof repair, we are also assisting agricultural development with our partners at Siembra Tres Vidas-Trama, mangrove restoration efforts with Caras Con Causa, and forest restoration efforts alongside the USDA- Forest Service.

Concrete is used extensively in mass-produced residential construction in Puerto Rico. For those that have the finances to do so, a layer of sealant is applied to protect the surface from any filtration, however it needs to be reapplied every 3-5 years to maintain its integrity. Without sealant and proper re-application, many roofs were left unprotected and exposed to the elements during Hurricane Maria. The cost to do this is often prohibitive for most families NECHAMA asissits.

Students are focused on pressure washing, scraping, priming, and sealing, as well as interior restoration. Both of these areas are needed because over time water filtering through the cracks will weaken the surrounding concrete. Affected interior and exterior areas need to be removed and replaced to keep the integrity of the structure intact.

Our partner, Siembra Tres Vidas, is focused on making Puerto Rico more self-sufficient through agricultural practices to promote long term sustainability. In an effort to utilize clean and environmentally conscious agricultural efforts, Siembra Tres Vidas -Trama has three key strategies: utilizing the natural slope of the land, using natural alternatives to chemical pesticides and fertilizers, and planting 100% organic seeds. Their hope is that their success will inspire other farmers on the island to tap into this same methodology. SIEMBRA also participates in a crop share, allowing community members an opportunity to volunteer their time in exchange for fresh produce.

As part of NECHAMA’s SUNY/CUNY Summer Program, we are partnering with Siembra Tres Vidas – Trama on their farm in the mountainous town of Arroyo. So far, our team has made a great deal of progress in clearing land for farming and in soil cultivation to prepare for new crops which primarily go to low-income households to supplement their food supplies.

When Hurricanes Maria and Irma hit Puerto Rico, it left the island devastated. After the storms, driving along the main stretches on the coast proved difficult due to large mounds of sand, blown inland from the beaches. Not only did the storms destroy homes and roads with water and wind, but it damaged the environment by destroying natural ecosystems, deeply affecting local wildlife in areas like the Ciénaga Las Cucharrillas Nature Reserve.

The damage storms have had on the Reserve has deeply affected the local community – causing increased flooding, mosquitoes, erosion, and water contamination. NECHAMA is working with CARAS CON CAUSA to replant mangroves, and remove invasive species in order to better protect nearby families from these ongoing issues, and build up protections from future natural disasters.

Mangroves play a pivotal role to the environment due to their extensive root system in mitigating soil erosion and protecting shorelines against severe weather events. Mangroves are also a key player in desalination, the process of removing minerals and salts from water that can be harmful for agriculture. During the planting process, every mangrove is tagged to keep track of data including species, height, and specific location.

FOREST RESTORATION WITH THE U.S. DEPARTMENT OF AGRICULTURE – FOREST SERVICE

The combined effects of Hurricanes Irma and Maria have altered El Yunque National Forest’s landscape for decades to come. Following the storm season that devastated the area in 2018, the U.S. Department of Agriculture – Forest Service agents assessed that 40-60% of the tall trees that formed the canopy of the forest had been uprooted from devastating winds. Multiple remote trails throughout the area were ruined from mudslides and debris and rain shelters as well as watersheds were obliterated. The visitor center, “El Portal”, sustained significant damage and remains non-operational over 20 months later.

As the only rainforest in the United States & territories, the USDA-Forest Service is on a mission to restore this public land, with NECHAMA’s help, in the following ways: